3 Reasons to Pay Attention to Your Hearing Health (and steps you can take right now). 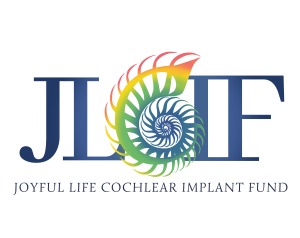 Joyful Life Cochlear Implant Fund is very personal for two of our board members. They share their journey’s back to hearing with cochlear implants here.

Angela was born with normal hearing. During a routine school hearing exam at the start of 1st grade, a mild hearing loss had appeared. Her parents were assured that it would not progress.

Unfortunately, Angela slowly lost all of her hearing over the next 15 years. During that time, her parents were told she wouldn't graduate from high school nor be able to go on to college.

Each summer Angela would try the latest hearing aids, always being assured that 'this time', they will help. Due to her type of hearing loss, they did not. Angela taught herself to lip-read and relied heavily on that as her hearing loss progressed.

Angela graduated from mainstream high school with high honors and earned a B.S. Degree in psychology and sociology four years later. Angela regularly made the Dean's List and was also a cheerleader for football and men's basketball for three of her four years in college, despite not being able to hear the dance music very clearly.

Shortly after college graduation, Angela's hearing took a significant drop and she was no longer able to use the telephone. Angela's mother pleaded with her to consider a cochlear implant, but after so many years of disappointment with hearing aids, she was very reluctant. With no other options to remain in the hearing world, Angela received her first cochlear implant in May of 1997. In addition to getting her hearing back, Angela also regained her spirit and joy of life.

Angela went on to work for Cochlear Americas for eight years, in various roles, helping others with hearing loss through their cochlear implant journey. During that time Angela also completed her MBA degree.
Angela is the Founder & Executive Director of the Joyful Life Cochlear Implant Fund. She is dedicated to ensuring cochlear implant recipients have all the support they need to thrive.

Michael Noble is a cochlear implant recipient since 1991.

He has a tremendous passion for helping others receive the same gift of hearing he received nearly 30 years ago. He was born profoundly deaf. His hearing loss was not detected until the age of fifteen months. Upon diagnosis, an audiologist delivered the devastating news to his parents, “Your son, Michael, will never be able to hear, speak, or do the things that a normal hearing person would do. The maximum reading level he will ever achieve will be that of a third grader.”
Determined to find a solution, Michael’s parents learned about the revolutionary, new technology called a cochlear implant. After extensive research, they determined this was the best option for Michael. In June of 1991, Michael was the first child in North Texas to receive a cochlear implant.

Before and after cochlear implantation, Michael was involved in intensive Auditory-Verbal therapy. He went to two, hour-long therapy sessions each week and his speaking skills gradually caught up to the level of his hearing friends and classmates. With his parents in therapy with him, it continued at home, 24/7. After ramping up, Michael’s parents began to mainstream him in the first grade.

From the first grade to university, Michael attended mainstream schools and took honors courses with all normal hearing peers. In middle school, Michael even learned to play the violin. Moreover, he took both Spanish and French language courses throughout his academic career. With the strong foundation in listening, speaking, reading and writing, he graduated in the top ten students of a 400+ high school student class.

In May 2010, Michael received a BBA in Marketing from Southern Methodist University and honors in liberal arts. From 2010 to 2017, Michael worked as a Marketing Manager at Cochlear Americas, the very company that manufactured his cochlear implant. While working full-time at Cochlear Americas, Michael pursued his MBA full-time at the University of Colorado from 2013-2015 and graduated in May 2015.

Support Our Important Cause to keep cochlear implant recipients "on the air" with their hearing!

Sign up here for our online newsletter to receive all our latest news and events!

JLCIF is proudly in partnership with Cochlear Americas.

This website uses cookies to improve your experience while you navigate through the website. Out of these cookies, the cookies that are categorized as necessary are stored on your browser as they are essential for the working of basic functionalities of the website. We also use third-party cookies that help us analyze and understand how you use this website. These cookies will be stored in your browser only with your consent. You also have the option to opt-out of these cookies. But opting out of some of these cookies may have an effect on your browsing experience.
Necessary Always Enabled
Necessary cookies are absolutely essential for the website to function properly. This category only includes cookies that ensures basic functionalities and security features of the website. These cookies do not store any personal information.
Non-necessary
Any cookies that may not be particularly necessary for the website to function and is used specifically to collect user personal data via analytics, ads, other embedded contents are termed as non-necessary cookies. It is mandatory to procure user consent prior to running these cookies on your website.
SAVE & ACCEPT